Reverb is one of the trickiest tools to understand.

It took me years to learn how to use it properly.

You can use reverb to add depth and dimension to your mixes. But if you don’t know what you’re doing, it can quickly turn them into a muddy mess.

If you know the basics, but are still struggling to master reverb, the following tips will help. Follow them, and you’ll be on your way to using reverb like a pro.

Learn how to use reverb like a pro with this free reverb cheatsheet.

Amateurs throw reverb on everything.

Pros use reverb selectively to craft a deep, three-dimensional soundstage.

When some tracks feel far away and others feel close, a mix has depth.

But this only happens when there’s contrast.

Tracks only sound far away if others feel close. If everything is far, nothing is far.

And so the secret to crafting depth is creating this contrast.

Carefully choose which tracks to use reverb on. Leave others dry. And always make decisions in context—reverb never affects just one track.

Getting this right is the key to crafting larger-than-life mixes.

Add a bit of pre-delay.

The pre-delay control on Waves’ RVerb

This will separate the dry vocal from the reverb. Your brain will now perceive them as two separate sounds.

You’ll hear reverb, but the vocal will stay up front.

To hear this effect in action, watch the video below:

Density is how closely packed the reflections in a reverb are.

Low-density reverbs (like halls) have reflections that are spaced far apart from each other. You can often hear these reflections as discrete echoes.

High-density reverbs (like plates and chambers) have reflections that are packed together closely. The reverb sounds like one big wash.

They key is to know when to use one over the other.

High-density reverbs sound better on transient-rich tracks. If you apply a low-density reverb to a snare, you’ll hear transients ricocheting around in the reverb’s tail. This can sound unmusical. Vocals, on the other hand, can sound great in either.

Here’s a comparison between a low-density reverb and a high-density reverb on a snare. Notice that the plate sounds smooth, whereas the hall sounds choppy.

Reverbs that ring out too long will rob your mixes of clarity.

Don’t accept your reverb’s default decay time. Instead, tweak it so it covers the space between notes, but subsides before the next note plays.

We all love long, luscious reverbs that ring out forever. But there are downsides to using them.

They take up a ton of space, get in the way of other instruments, and obscure clarity and separation.

Shorter reverbs are often a better choice. They can create a similar sense of depth without sucking up as much space.

And don’t forget to try turning off the reverb tail completely. Often times, early reflections alone will get the job done.

Don’t accept the sound of your reverb as-is.

Instead, shape it to make it fit.

For starters, low end will often get in the way. Don’t be afraid to nix it with a high-pass filter. Same thing goes for the high end—you often don’t need it. 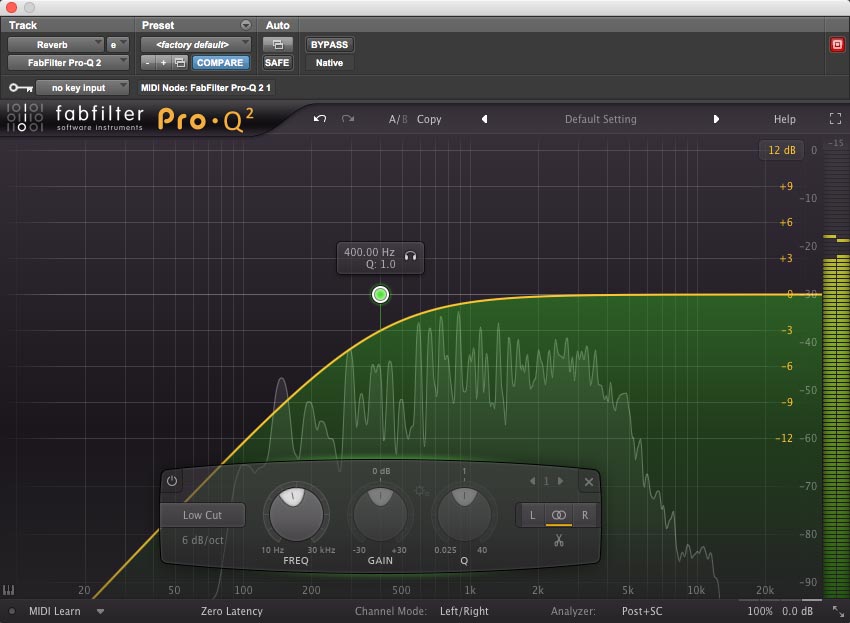 De-essing can also help tame unruly sibilants. I prefer to add this before the reverb on the send track.

Look at reverb as another track in your mix. Do whatever it takes to make it fit.

Great mixers use reverb to create the illusion of bigness.

You don’t need a ton of reverb to pull this off.

A good rule of thumb?

Add reverb to a track until you start to hear it, then back off.

And remember—reverb takes up valuable real estate in a mix. The more tracks you have, the less space you’ll have for it.

Use less than you think you need.

Who says reverb always has to be in stereo?

Mono reverbs are often preferable. They take up less space. And if you pan them behind a track, they do a better job at pulling it back in the soundstage.

Again, the goal is to create the perception of space while taking up as little real estate as possible. If you can do it with less, you should.

Music is constantly changing. Your reverbs should too.

Ride your reverb returns to support the arc of the song. Use change to help reinforce emotional and tonal shifts. Add more reverb to the chorus to make it feel bigger. Take it away in the verses to make them feel smaller.

Ultimately, it’s all about supporting the song. This is the stuff that separates a good mix from a great one.

When it comes to crafting space, delay is overlooked and underutilized.

It’s often a better tool for the job.

Pro Tools’ stock delay—often the perfect tool for the job!

Delay can achieve a similar effect as reverb, while taking up much less space. It’s my tool of choice when dealing with high track counts, where sonic real estate is at a premium. And I’m not the only one who thinks so…

“I’ll always go with delay instead of reverb if I can hide it.”

For starters, try a 60 ms. delay tucked behind an electric guitar or vocal. This can add a subtle sense of depth, while taking up almost no space in the mix.

Learn how to use reverb like a pro with this free reverb cheatsheet.