There’s a button that’s so sneaky, it can secretly suck the life out of your mixes.

It may seem innocuous, but it’s almost guaranteed to destroy your next mix if you don’t use it properly.

If you think it’s on a compressor, EQ, or reverb, you’re wrong. In fact, it’s built right into the channel strip of your favorite DAW…

The Hidden Dangers Of The Solo Button

Does this sound familiar?

You solo the kick drum, add an EQ plugin, and tweak it until the kick sounds great. You move on to the snare, solo it, and do the same thing. Then you solo the vocals and compress them in isolation. And you slowly move through your mix, using the solo button to shape each track individually.

It’s tempting to work this way. After all, it’s easier to focus on one track at a time. Since you’re not being distracted by other sounds, you can hear subtle changes more clearly. And this helps you make better choices, right?

If Everything Sounds Good In Solo, You’re Probably Not Mixing Right

Let’s say you’re trying to fit a vocal into a busy rock mix. You solo the vocal. It sounds perfect. In fact, it doesn’t sound like it needs any EQ. But when you unsolo the vocal and listen to it in the mix, it sounds muddy and indistinct.

What’s going on? Are your ears fooling you? Not exactly.

Mixing is all about context. You’re trying to make a group of sounds blend together as a cohesive unit. And so it doesn’t matter how each track sounds by itself. The end listener is never going to hear each individual track anyway. All that matters is how each track contributes to the mix as a whole.

So while the vocal may have sounded great on its own, it actually needs a lot more top end (and probably some upper midrange) to cut through the wall of edgy guitars. But by soloing the vocal, you completely removed the context you needed realize this and make the right decision.

So you try again. But this time, you EQ the vocal while everything else is playing. You add a ton of upper midrange and top end to make the vocal cut. If you solo the track, it sounds horrible – thin, edgy, and bright. But in the context of the mix, it works perfectly.

This is how you craft a great mix.

In fact, there’s a time and a place where it can actually be quite helpful.

At the absolute beginning of your mix.

When you’re first starting a mix, take a few minutes to listen to each track in isolation. If you’re mixing an unfamiliar piece of music, this is a great way to learn what each individual track sounds like. It’s also an opportune time to clean up noisy tracks, fix bad edits, and even do some subtractive EQ.

But after this point, pretend the solo button doesn’t exist. Seriously.

If you find yourself reaching for it unconsciously during a mix, try solo-safeing every track (like you would with a reverb return). If you’re using Pro Tools on a Mac, you can do this by holding down the Command (⌘) key and clicking on each solo button. 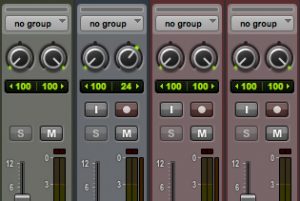 The less you solo, the better your mixes will sound. It’s that simple.