Skip to content
Click here to download your FREE 7-Day Music-Making Challenge
These three massive myths are stopping you from making music. Keep watching to learn what they are and how to avoid them.

Hey, this is Jason from Behind The Speakers, and in this video you’ll discover what it really takes to make music like a pro.

But before we dive in, I also put together a free seven-day music-making challenge that will help you develop the skills you need to double your musical output. So if you’re ready to make more music today, click the link in the description below or up there in the video to get started right now.

Myth number one is you need to feel inspired to make great music. Now the inspiration myth is one of the biggest myths that I see pushed among most music makers. This idea that we’re just supposed to sit around and wait for this feeling of inspiration and creativity to wash over us, and then in a trance we can just sit down and write this song in a dreamlike state and suddenly it sounds amazing, and it’s a hit record and, you know, we change the world, right?

When you talk to any professional music maker, anybody who does this for a living or on a really high level, you don’t find that they’re sitting around waiting for inspiration to happen. They’re proactive. Every single day they show up and sit down in the chair and try to create. And most days it probably doesn’t feel like they make anything decent. They feel like they’re just banging their head against the wall, right? But this is what music making is about, right? It’s about putting your butt in the chair and spending the time day after day to improve your craft, not just sitting around and waiting for some magical feeling to wash over you.

So if you’re waiting for inspiration, if you’re waiting to be inspired and that’s the only time that you create, then you’re not going to create very much. Because if you’re like most people, inspiration doesn’t happen all that often. That’s not to say that you shouldn’t create when you feel inspired, just that, you know, inspiration is a part of it but at the end of the day if you really want to do this as a pro and you really want to create lots of music, you gotta practice the art of sitting down in your chair, and writing, and producing, and mixing, and recording even when you feel uninspired, and even when it feels like you don’t really create anything meaningful.

So instead of judging your progress by, you know, waiting for this inspired moment and then having these songs that feel like they were just born out of this wonderful feeling of inspiration, judge your progress by how much time you’re spending just sitting in the chair and making it happen. And I promise you if you can really practice the art and the muscle of really just sitting down and creating, and making the art of creation a habit versus just waiting and, you know, kind of waiting for inspiration to wash over you, you’re going to create a whole lot more music.

Myth number two is your lack of free time is holding you back. This is the biggest myth that I hear all the time from my students. They say things like “man, if only I didn’t have my day job, I’d have so much more time that I’d be able to create so much more music.” Now inevitably, when I look at these people and actually dive in to their workflow and their process of creating music, I say, you know, how much music did you create in the last year? And they say well, I made two songs. And how long did you spend on each song? Well, I took six months. And how many hours did it actually take you to create that piece of music, and how many hours did you spend toiling away tweaking plug-ins and not committing, and recording a million different takes of everything, and then pushing everything off until mixing, and then remixing it eight different times?

The solution is not more time. Because inevitably time just becomes something that you use to push off the decisions, you know, to push off making commitments instead of being firm about okay, I’m going to make this piece of music. I’m going to give myself a week to do it, and then I’m going to move on. More time just becomes an excuse, right? So more time doesn’t necessarily mean more music. And if you’re struggling to create more music and you’re feeling like you don’t have enough time, instead flip the whole time thing on its head. Look at time not as a limitation, but as something that can be empowering. It’s something that can be a self-imposed boundary that you can use to actually become more efficient, to tune your workflow, right? To practice the art of making commitments.

So instead of saying man if I had more time I’d be able to create more music, instead say okay well I only have four hours a week to work on music, and I’m going to create a song a week in those four hours, and I’m going to challenge myself to write and record and mix something in four hours. And I know it sounds crazy, right? But there’s this idea called Parkinson’s Law. And basically the gist of it is work expands to whatever time we allot it, right? So if you say I’m going to create a song in three months, you’re going to take three months. You’re going to figure out a way to fill up all that time with the music making process. But if you say I’m going to make this happen in two weeks, or two hours, you might feel like it’s impossible, but you’ll find a way. You’ll make it happen.

So again going back to this idea of lack of time, it’s a myth. We all have twenty-four hours in a day. Granted some of us have more time to make music than others, but nine times out of ten when I take a look at the workflow and the way that people are moving through the mixing process and just the music making process in general, it’s not a matter of more time, it’s looking at how can I be more efficient? How can I make firmer commitments? How can I decide? How can I make decisions? And if you practice those things, you’re going to be able to make a whole lot more music than you ever thought was possible in the limited amount of time that you have in your day, whatever that might be.

Myth number three is you’ll move on once it’s perfect. Now this is a myth that I know very well because I’m a perfectionist. I like tweaking things forever, and I like to feel like I’m making the absolute best thing that I can make. And if you’re like me, you know how debilitating this myth can be. We all kind of know on an intellectual level that there’s no such thing as perfection, right? There’s no arrival point where you’re going to spend, you know, eight days mixing something and suddenly there’s not going to be anything left to fix, right? You can always find something to improve. And what ends up happening is even when you spend a whole lot of time working on something, and you make it what you think is perfect, and you toil away for way too long and then finally you’re done, then you listen to it three months later and you hear all sorts of problems, right?

So the challenge is that we’re constantly improving, right? And so we’re constantly going to be able to look back on what we’d done in the past and say man, I wish I would’ve done this better. I wish I would’ve done this instead. The point is not to spend this time toiling away and working on one little thing so long that you lose perspective and lose that momentum from finishing things and moving forward. You have much more to gain from finishing a project and moving forward and starting something new, than you do from toiling away for days or weeks or months on end. A new project is going to present new challenges that are going to help you grow and progress as a music maker, and not only that but you’re going to be able to create much more music in the process.

So instead of looking at the results of your creation, and judging that and constantly thinking about okay how can I make this better? How can I change this? How can I tweak this a little bit better? Look at the process and understand that making music is really about improving your own skills and abilities. And if you take that perspective, you’ll find that instead of toiling away on each individual track to make it perfect, look at the tracks as stepping stones. And realize that once you’ve completed something, you kind of have another notch in your belt, right? You have another track under your wing that’s just going to make you a better music maker, and you’re going to take all that knowledge and skill and experience that you gained on to the next project, and that next project is going to sound so much better. So instead of toiling away waiting for perfection, it’s never going to happen – spoiler if you didn’t know that already – just move forward. Don’t let perfectionism hold you back from making music.

But before you go, leave a comment below this video and let me know – which of these three myths do you struggle with the most? I’d love to hear from you, so leave your answer in the comments section below.

Thanks so much for watching, and you can check out more music making tips right here on my YouTube channel or at BehindTheSpeakers.com. 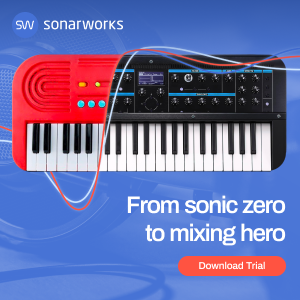