The loudness war is ending, but the obsession lives on.

While the quest for loudness isn’t the frenzy it once was, knowing how to get there still matters. If you’re trying to make music louder without sacrificing impact, clarity, and dynamics, the following tips will help.

I spend very little time worrying about loudness, and it’s been ages since I’ve had a mix rejected because it was too quiet.

Also, I rarely master my own mixes. I trust the mastering engineers I work with to achieve competitive levels. Most of the time, they do a fantastic job. Sometimes, they go too far. In cases like these, I share my thoughts with the client and let them make the final call. At the end of the day, it’s their record.

If you’re trying to make music louder, keep these things in mind:

The loudness war is ending

As we continue to race towards a streaming world, the quest for uber-loud is quickly becoming uber-pointless.

Most streaming services—including Apple Music, Spotify, and YouTube—now automatically adjust the volume of different tracks so they play at an equal level. This way, listeners don’t have to adjust their volume knob when switching between songs.

Louder tracks end up sounding worse than those that were mastered more conservatively.

To learn more, watch the video below:

Every mix has a unique loudness threshold

People often ask, “How do I make my mix as loud as the [Insert Band Name Here] record?”

Attempting this is a bad idea.

Because every mix has a unique loudness threshold. This is the furthest you can push a track before it falls apart, and it varies based on many factors—including arrangement, instrumentation, and frequency content.

Since every mix has a different threshold, comparing the loudness of one track to another is pointless. Instead, evaluate each track on its own terms. Yes, you still have to be competitive. But if you’re a few dB quieter, it’s okay. There’s no point in ruining a mix just to make it louder.

Loudness will always be a sacrifice

While the tools we have to achieve loudness are better than ever, music hasn’t changed. You can only push a mix so far before destroying punch and adding distortion. Be aware of these downsides. Is loudness really worth the sacrifice? If not, let it go.

With that being said, here are the best ways to make music louder, while retaining as much impact and clarity as possible.

Loud mixes have an even distribution of energy throughout the frequency spectrum. Every nook and cranny is filled. Peaks and valleys are avoided.

Peaks are parts of the frequency spectrum with excess energy. These bottlenecks will limit your ability to make music louder. (This is one reason why excess bass is often a problem.)

Valleys are parts of the frequency spectrum with dips in energy. These are missed opportunities to make music louder. (Imagine filling a dresser with clothes, but leaving the bottom drawer empty.)

Follow these steps to determine whether your mix has any peaks or valleys:

In general, you’re looking for an even curve with no big bumps or dips. If you don’t see this, try making EQ or fader adjustments. 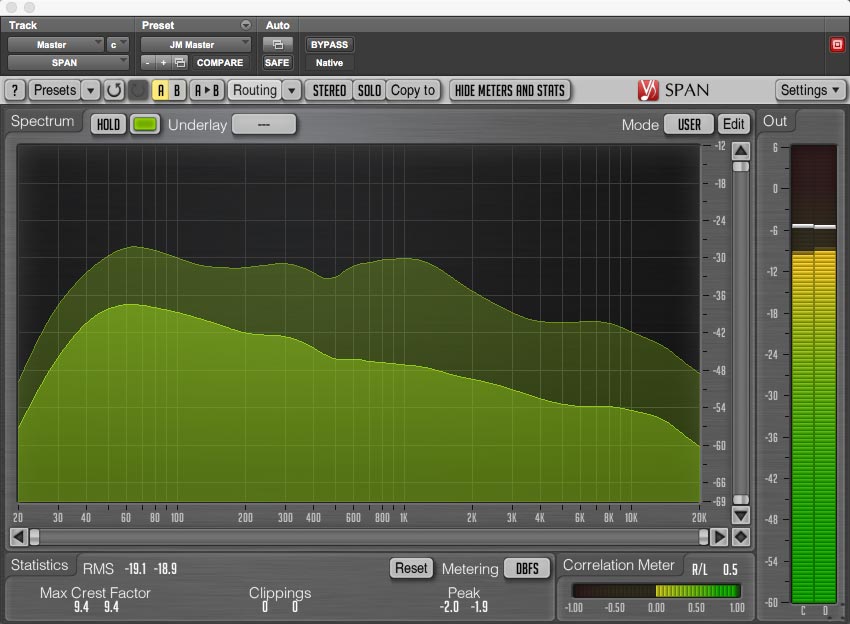 Take this technique with a grain of salt. The shape of a mix will vary based on arrangement and instrumentation. No mix will be perfectly flat—it’s normal to see a few bumps. However, in most cases, flatter mixes can be pushed to louder levels without distortion.

If you’re trying to make music louder, you’ll likely have to get rid of some deadweight.

Low end is the first thing you should throw overboard.

While it takes up the most headroom in a mix, low end contributes the least to the perceived volume of a track. In the quest for loudness, it’s your ultimate enemy.

You can often nix everything below 40 Hz without drastically changing the sound of your mix. This will free up headroom and help you achieve louder levels without distortion. Be careful though—in some mixes, there’s stuff down there that you won’t want to get rid of. 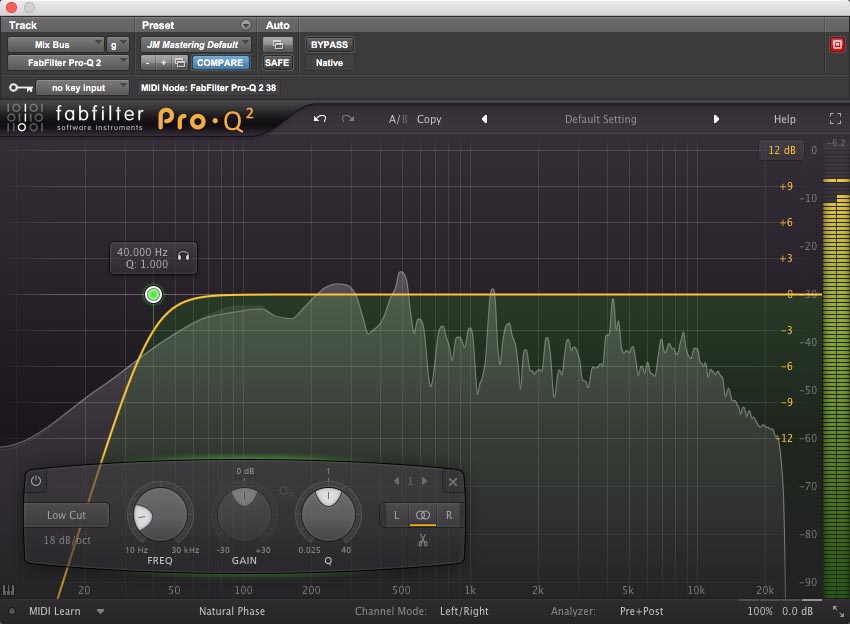 A high-pass filter on the mix bus, set to remove excess low end

Don’t expect one limiter to do all the work.

Instead, try to achieve loudness in stages. Add 1 – 2 dB of limiting at several points in the chain—both on individual tracks and busses. It’s like applying several coats of paint to a wall, instead of trying to coat it in one fell swoop.

This approach will lead to much more musical results.

Some mastering engineers apply this technique to the mix bus too. Instead of trying to achieve loudness with one limiter, they use several in series. Try it!

Overlimiting is one of the easiest ways to ruin a great mix.

As you drive most limiters harder, your track gets louder. Louder usually sounds better. This makes it difficult to determine when enough is enough. You can easily make a mix worse without realizing it.

Luckily, most modern limiters include a feature that automatically turns the output down as you crank the input. This way, you can hear the effect of the limiting without being fooled by an increase in volume. This feature makes it easy to know when to back off—you just have to remember to use it!

Here’s how to enable this feature in FabFilter’s Pro-L:

In the mixing world, clipping is a dirty word.

In some cases, it can actually be useful.

In fact, it’s the secret weapon of choice for many mastering engineers.

Clipping can add loudness and energy to tracks. It’s often a great alternative to limiting. Try both—some tracks will benefit more from one over the other. You can even use them together.

To learn how to use clipping effectively, watch the video below:

What are your favorite ways to make music louder without sacrificing impact and clarity? Let me know by leaving a comment below!