Mixing feels effortless. You feel like a rockstar. And you finish the job in half the time.

While we all dream of days like these, they rarely happen. In reality, we often fix as much as we mix.

Here are my favorite ways to fix poorly recorded tracks. These techniques will help you solve most problems quickly, so you can move on and start mixing sooner. I hope you never have to use them! 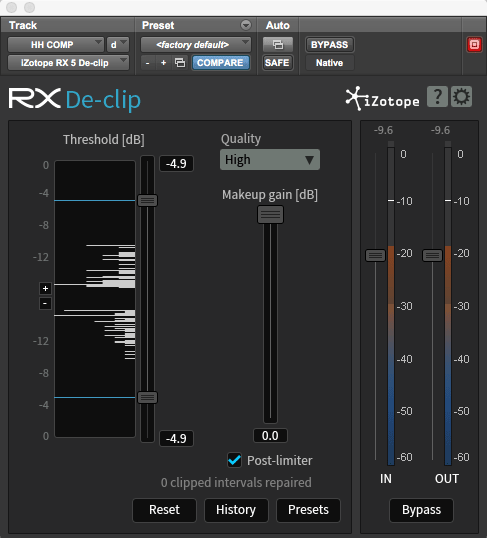 De-clip is a lifesaver. While it won’t remove clipping or distortion completely, it does a great job at reducing it.

Since this plugin is processor intensive, you’ll get best results by using it offline and committing the results to audio. Just remember to set the quality to high.

2. Too Close To The Mic: Multiband Compression 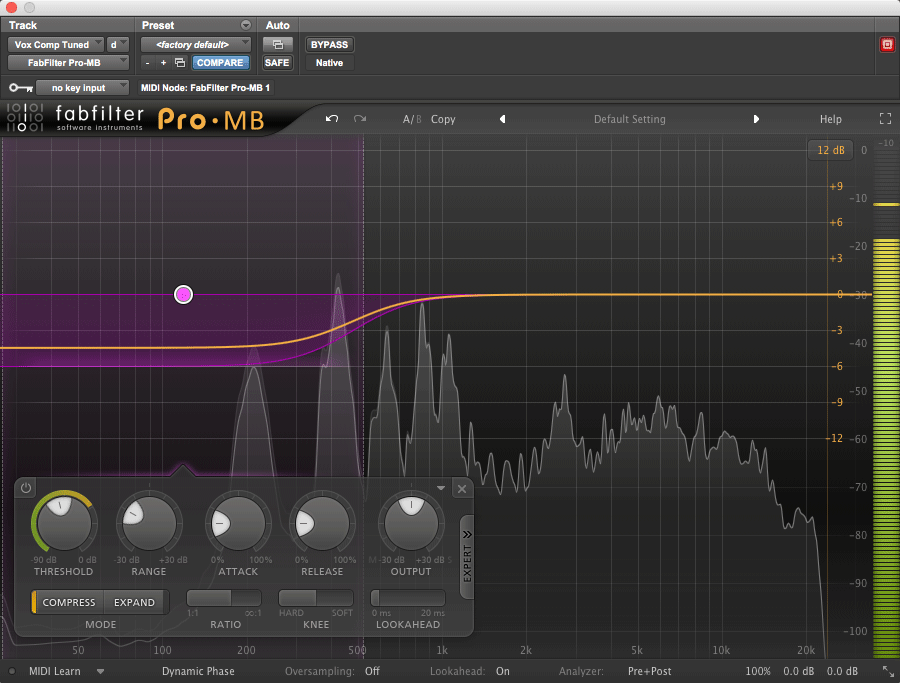 There’s nothing worse than mixing a vocal that was recorded too close to the mic. Since the resulting problems are often inconsistent, they can be tricky to tame. Filtering can leave the vocal sounding thin, and automation can take hours to pull off.

A better approach is to use a multiband compressor. Set it to compress the low end, but only when it becomes a problem. This way, you’ll retain as much of the fullness and body of the vocal as possible.

This technique is far from perfect, but it gets the job done. To learn how to pull this off in detail, read my tutorial on multiband compression.

Also—iZotope RX 5 Advanced has a De-plosive tool that may be worth exploring. I haven’t tried it personally, but it looks great. 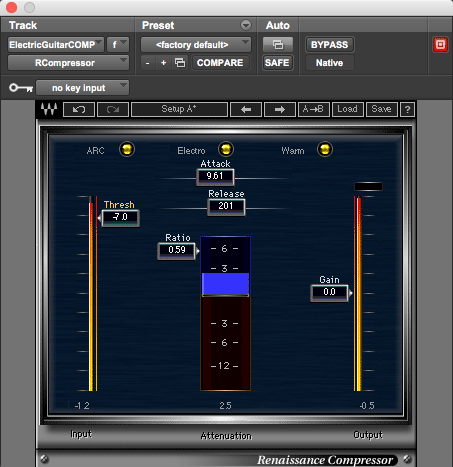 Once a track has been squashed, there’s little you can do to save it.

It’s worth experimenting with upwards expansion set to accentuate the transients of a performance. This can add back punch to flat, lifeless tracks. You can pull this off using Waves’ RComp, FabFilter’s Pro-G, or most transient-shaping plugins (including Waves’ TransX and BitterSweet).

To learn how to use this technique, watch the video below:

I’ve gotten mixed results with this approach. While it can restore a bit of life, it’s far from a game changer.

If the harshness is present throughout the entire performance, EQ is the best fix. Follow the steps below:

For more on this technique, read my subtractive EQ tutorial.

If the harshness is only present in certain parts of the performance, use multiband compression instead.

Multiband compression will pull back problem frequencies, but only when they get too loud. This is a more transparent way to fix problems that come and go. To learn how to pull this technique off in detail, read my article on multiband compression.

If the harshness only appears in one or two spots, automate the edgy frequencies out with an EQ. If you’re using the latest version of Pro Tools, the new clip effects feature makes this easy. Just cut the problematic portion of the track into a new clip and apply corrective EQ. 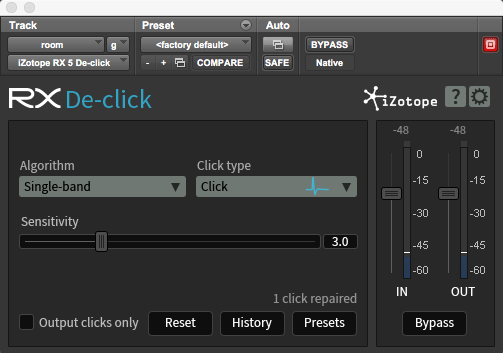 iZotope RX to the rescue, once again.

For removing unwanted noises, iZotope RX is a one-stop shop. The De-noiser does a good job at eliminating buzz, hiss, hum, and other constant noises. The De-click tool, however, is my favorite. It flawlessly removes lip smacks, clicks, pops, and other transient-based noises.

I recommend doing this type of repair work on headphones. It’s much easier to hear what you’re doing. 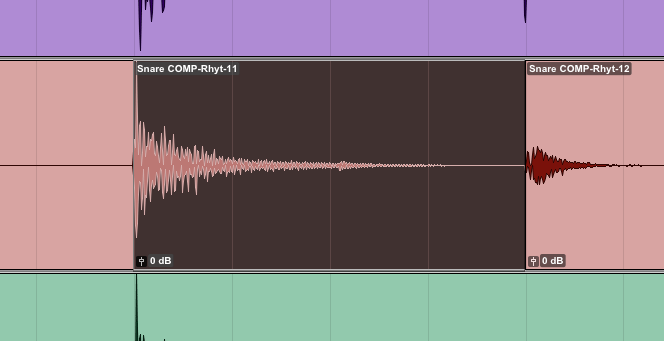 I’ve tried every technique around to get rid of hi-hat bleed on the snare track. While all have their pros and cons, the following is my favorite:

Notice that I prefer to take a snare sample from the original track instead of a library. By doing this, I can better preserve the sound of the original snare. The only role of the sample is to force down the level of the hi-hat.

This doesn’t work with dynamic, intricate snare parts. But for most straight-ahead grooves, it’s a lifesaver. 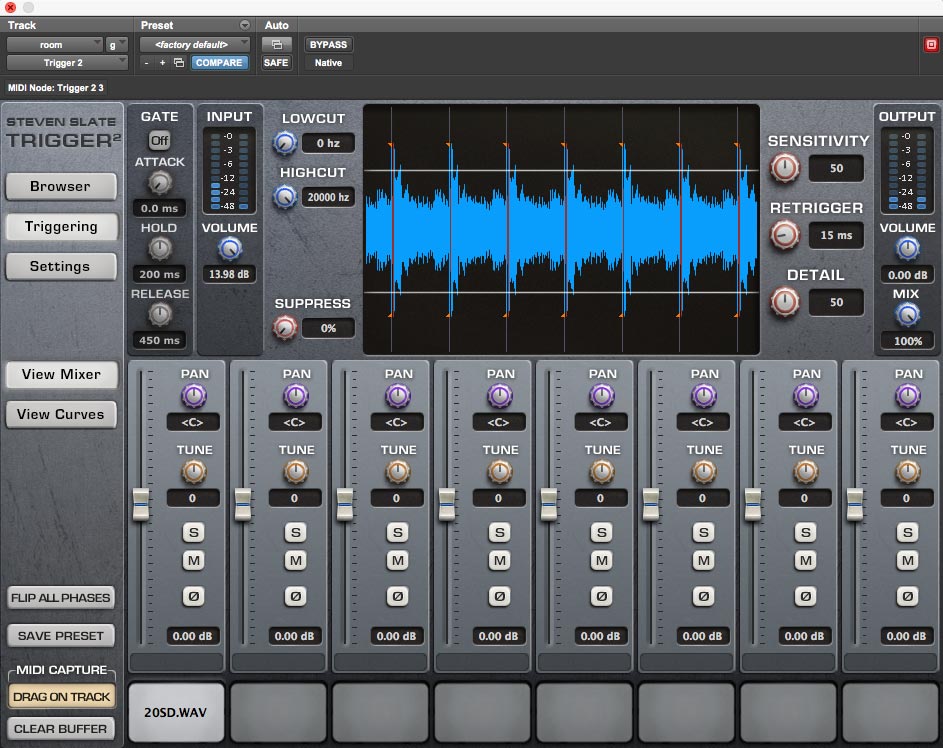 Life is too short to spend hours EQing a kick drum.

If a drum track isn’t up to par, augment or replace it with a sample. This is faster, and usually sounds better.

You can often get away with replacing the kick entirely. Snares typically sound best when augmented.

For dynamic or complex performances, you may be stuck with the original drums. As always, let the performance dictate your approach.

When All Else Fails…

Sometimes, despite all your efforts, you can’t salvage a poorly recorded track. When this happens, opt for the following (in order of priority):

If you’re mixing your own music, do this before you try any of the stuff above. There’s no point wasting 3 hours trying to fix something you can re-record in 15 minutes.

If you’re working for a client, it’s reasonable to ask them to re-record something. Remember—you’re both on the same team, and your mission is to make their record sound great. Explain to them that re-recording will make the mix better, but let them make the final call. If they want to keep the problem, don’t fight them. It’s now your job to make it work.

9. Shape Your Mix Around It

Trying to hide a poorly recorded track will make it sound worse. Instead, try shaping your mix around it. Make it a focal point, and listeners will feel like it was intentional (instead of a mistake).

The worst tracks are ones that sound “kind of” bad. If a track is straddling the border between bad and good, take it in one direction or the other.

If you can’t make it good, mess it up. Distort, filter, and compress it heavily. Make listeners think it was meant to be that way.

If a track is distracting you from the song and performance, mute it. If you can afford to let it go, you’ve just made your job a whole lot easier.

What are your favorite tricks and techniques for fixing poorly recorded tracks? Let me know by leaving a comment below!