Mixing takes time. There’s no way around it. But while you may enjoy staring at a screen all day, it’d be great to get to the finish line faster, right?

The following 8 tips will streamline your mixing workflow. Follow them, and you’ll finish your next mix in half the time — without sacrificing quality.

Do you spend the first hour of your mix carefully crafting the kick drum in solo? If so, you’re wasting your time.

How do you know what role that kick plays in the track? How important (or unimportant) it is? How to make it fit with the bass?

Work like this, and you’ll end up retracing your steps later on.

Instead, start mixing with broad, gross movements. Work quickly and impulsively. Don’t dwell too long on any one track. Be aggressive with fader moves and EQ decisions. Focus on the big picture versus the small details. As you move through the mix, start narrowing your focus. Circle back over previous decisions and hone them in. Pay closer attention to fine details.

You can visualize this process as a series of concentric circles. The beginning of the mix is represented by the largest, outermost circles. As the hours go by, the circles get smaller.

This is a much more efficient way to work, and it’ll save you hours. Try it!

Keyboard shortcuts are God’s gift to man. Replace menu-hunting with a few keystrokes, and you’ll supercharge your mixing workflow.

Most common tasks have a keyboard shortcut associated with them. Use it, and you’ll save a few seconds. Over the course of a mix, these seconds can add up. While you may know a few shortcuts already, it’s worth taking the time to master them all.

Here’s where you can find a list of shortcuts for your DAW:

You may want to invest in a keyboard cover as well. These can help you learn your DAW’s most common shortcuts. KB Covers has covers for most major DAWs (including Pro Tools, Logic, and Ableton).

Referencing — the practice of comparing your mix to other commercial tracks while working — can help keep you on track during the mixing process. It’ll help you hone in better balances by continually retuning your ears during a mix. I like to think of references like bumpers at a bowling alley. (But unlike bumpers, nobody has to know you’re using them!)

Click here to get 12 reference tracks I use during every mix.

Magic AB is a great plugin that makes referencing easier. You can insert it on your master bus and load up a preset stocked with your favorite reference mixes. This way, you can avoid having to import them into every new session.

4. Focus On What Matters Most

Spending hours tweaking a synth line nobody will ever hear is a waste of time.

At the beginning of every mix, ask yourself — what are the core pillars of this track? What’s the stuff that really counts? These will often include drums and vocals.

Bring these elements in early on, and spend the majority of your time with them. You’ll be working more efficiently by focusing on what matters most.

Whenever I’m prepping a session to be mixed, I try to combine and consolidate tracks as much as possible.

If I can bounce 5 synth tracks down to 1, I do so. If the lead vocal is cascaded across ten tracks, I consolidate these down to 1.

Similarly, I set up busses and aux tracks so I can process multiple sounds together.

By shaping several tracks at once, I can get to the finish line more quickly.

With that being said, some processing works best when applied to individual tracks. De-essing is a great example. If you have multiple tracks of background vocals, it’s best to de-ess them individually. Also, if the grouped tracks vary considerably in dynamics, compression often works better when applied individually.

The solo button is the most dangerous button in your DAW. Stop overusing it.

Tweaking tracks in solo is often a waste of time. Yes, it’s easier to hear subtle changes in solo. But when you listen to a track you EQ’d or compressed in isolation with the rest of your mix, it often doesn’t fit right.

Mixing is all about context. You’re trying to make a group of tracks sound great together. So it doesn’t matter what each individual track sounds like alone. All that matters is how they work together as a unit.

Make more decisions in context, with the rest of the tracks playing. If you’re used to soloing, this can feel uncomfortable at first. But by doing so, you’ll force yourself to make better decisions the first time. Which means you’ll waste less time revisiting these decisions later on in the mix.

Sitting back down to mix after a long lunch break? You’ve got a golden opportunity to hear your mix with fresh ears. Make the most of this moment with a simple trick from legendary mixer Bob Power:

8. Know When To Print

Mixing follows the law of diminishing returns. When you first start a mix, you can make significant gains very quickly. In the first few hours, a mix typically goes from “wow, this sucks” to “this is somewhat tolerable.”

But as you move through the mixing process, this progress starts to slow. Suddenly you’re spending hours trying to hone in that last 10%.

And then you hit a wall where things stop getting better. Changes made past this point are useless. They may even make your mix sound worse. 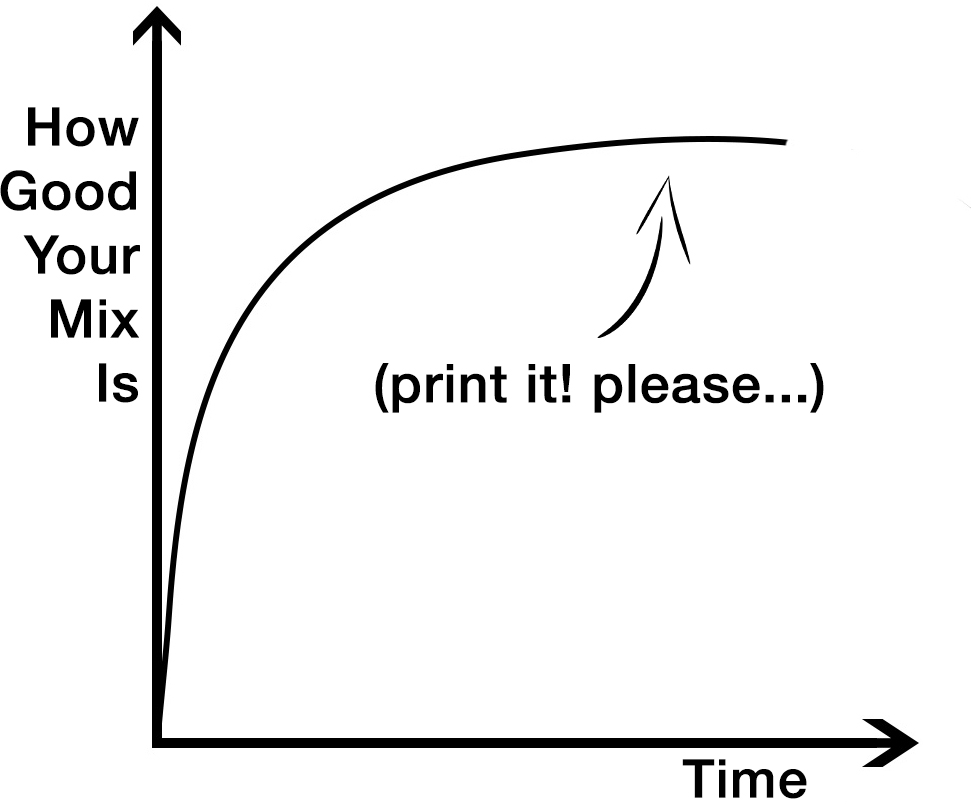 The law of diminishing returns, as applied to mixing

Learn to recognize this moment and walk away.

This is difficult at first, but becomes easier with practice. Just remember that more time spent mixing isn’t always a good thing. After all, you don’t want to end up like this guy…right? 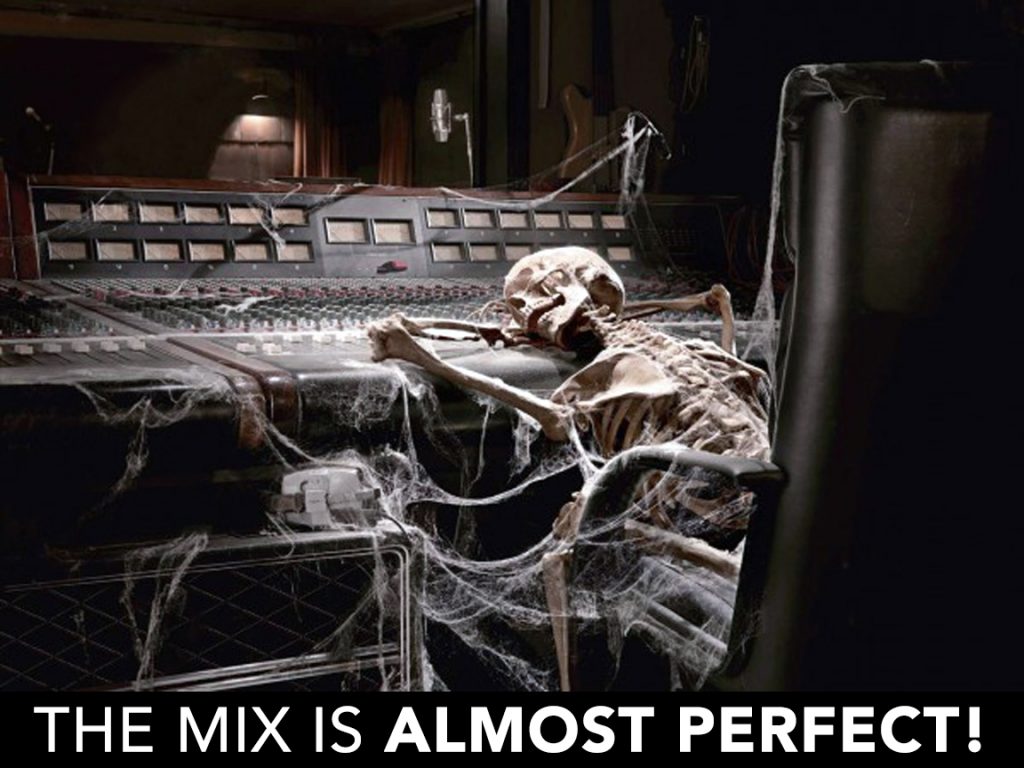