While compression is one of the most powerful tools we have, it’s also one of the most misunderstood. If you’re struggling to wrap your head around it, you’re not alone. Mastering compression can take years of practice. Some seasoned pros still don’t fully understand it!

Avoid the following mistakes, and you’ll be well on your way to conquering compression, once and for all. Enjoy!

1. Your Attack Time Is Too Fast

Fast attack times are deceptive. At first listen, they make compression seem easy. They effectively control even the most unruly tracks, yielding a smooth, consistent sound with minimal effort and tweaking.

But are fast attack times as magical as they seem?

You’ve probably heard about transients. People certainly seem to like talking about them. Turns out, they’re pretty important.

Transients are the sharp, percussive onsets of sounds. They add punch and impact to tracks. They help our ears pick out parts in busy arrangements. They make music exciting.

Overusing fast-attack compression is the quickest way to destroy your mix’s punch and impact. This will make sounds harder to hear, decrease clarity and intelligibility, and make your mix sound like it sits several feet behind the speakers (no pun intended).

Sometimes this is what you’re looking for. Most of the time, it’s not.

In most situations, medium to slow attack times are a better choice. Unless you’re purposely trying to soften transients, make sure to slow down the attack time enough to preserve them.

2. Your Release Time Is Too Slow

Release times that are too slow will cause compression to last longer than it should. This can create all sorts of odd effects. It can push tracks back in a mix, make them sound unsteady or inconsistent, and create unrhythmic, jarring dynamic shifts. (This is probably not what you’re looking for.)

Most of the time, your compressor’s release time should be set either:

To learn how to pull off #2, watch the video below. While I demonstrate this technique on vocals, the same approach can be applied to a variety of different tracks in a mix.

The solo button is the most dangerous button in your DAW.

Remember, you’re trying to take a group of tracks and make them work together. In order to do this, you’ve got to hear how different tracks relate to one another.

How much compression do you need on a vocal? The right answer depends on how busy the arrangement is, how many other tracks are competing for similar sonic space, and many more factors. The solo button makes it impossible to figure these things out. It completely removes the context you need to make the right decisions.

The more decisions you can make in context (with the rest of the tracks playing), the better your mixes will sound. Guaranteed.

How many times have you compressed a track and made it sound worse?

More often than you think.

Mixing isn’t just about making the right decisions. It’s also about avoiding the wrong ones. And the only way to do this is to A/B every decision you make with the original, unprocessed track at an equal volume.

Your compressor’s makeup gain control will make this easier. Just flip the compressor in and out of bypass and adjust the makeup gain until there’s no level difference between the before/after versions of the track.

Sometimes makeup gain can do more harm than good. For example, check out this screenshot of the default preset for Logic 9’s compressor. This preset loads up automatically when you open the compressor, before you actually do anything. 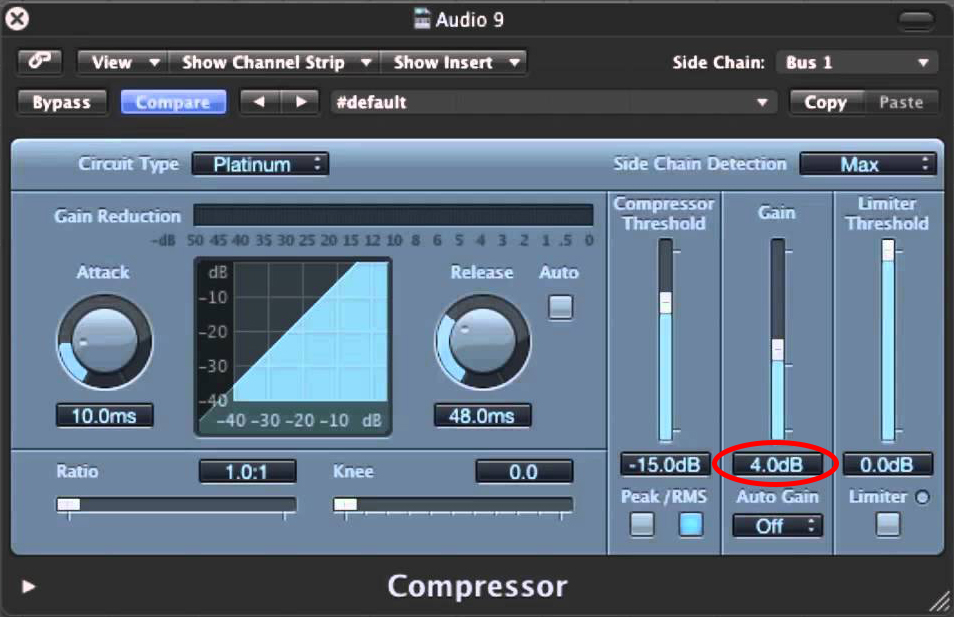 Notice anything interesting (hint…I circled it)?

The output gain is boosted by 4 dB!

What does this mean? If you put this compressor on any track, don’t change a thing, and then bypass it, there’s a good chance you’ll think the “compressed” version sounds better.

But in fact, the track hasn’t been compressed at all. It’s exactly the same, just 4 dB louder!

This is why it’s so important to level-match. If you’re not comparing at a consistent level, you’ll never know whether or not your decisions are improving a track, or actually making it worse!

Some mixers think they can lay back in their cushy armchairs and let the plugins do all the work. After all, compress enough and you won’t have to touch the faders…right?

Even the best compressor in the world won’t do the whole job for you. In order to get a great mix, you’ve got to move faders. You’ve got to automate. Tracks don’t mix themselves. And this especially applies to vocals!

Several layers of automation on a pop vocal

Stop relying on compression to tackle the whole job. Let it get you 80 – 90% of the way there, and then use automation to bring it home. This way, you won’t have to smash a track silly to get it to cut through a mix.

6. You Don’t Know Your Tools

Every compressor is unique. They each behave slightly differently. Certain ones work better for certain things.

Take the time to learn how each sounds, and what types of tracks it works well on. Know when to reach for one over the other.

And don’t just go by what some kid on Gearslutz told you. Try a few different compressors on each track. Develop your own preferences and tastes.

Your plugin library should be like a box of crayons. There should be no question what to reach for when.

7. You Don’t Know Why You’re Using It

There are really only two reasons to use a compressor:

Every time you reach for a compressor, you should be trying to do one of these two things. If not, then you probably don’t need compression.

8. You Rely On Presets

While presets can offer good starting points, they can just as often steer you in the wrong direction. If you’re relying on them exclusively, you’re doing yourself a serious disservice.

Study the fundamentals. Learn how attack, release, ratio, and threshold work together to shape different sounds. Experiment with a variety of compressors in your DAW. You should know how to get one to do what you want, without pulling up the preset menu.

To kick you off, here are a few resources I recommend: